Six years ago, I was the editor of a celebrity website which was the number 1 site for Robert Pattinson and Twilight news. Every day I wrote around six articles on Rob and the rest of the cast. One day, I decided to run a competition to find the number 1 Robert Pattinson fan in the world. 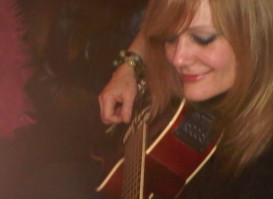 I can’t remember who won but after the closing date a woman called Sarah Barry Williams emailed me. She wanted to put her daughter Chariss forward but alas she’d missed the deadline. She told me that she’d written a song about her daughter’s love for Rob called She Wants to be Mrs Robert Pattinson. I thought the song was great and asked Sarah for her permission to write an article on her song. She agreed, not knowing that my article would bring her thousands of fans and change her life.

After my article was published, Sarah was inundated with requests from Rob’s fans wanting her to release the track and so she did. It did really well worldwide with thousands of people downloading She Wants to Be Mrs Robert Pattinson and she was inspired to write more Twilight inspired songs.

One of my favourites was the New Moon fan song:

Meeting Rob for the first time back in November 2009 was amazing and when I was invited to meet him again at the Remember Me press conference and premiere I was really excited. I wanted to see him again but I wanted to make Chariss’ dreams come true more. I emailed Sarah as soon as I could to tell her that I was giving up my place so that her daughter could meet the man of her dreams. Sarah couldn’t believe it.

I made Chariss a special badge, as she was representing my magazine and she tried to look older than her years as she was only sixteen and had to look at least eighteen to get past security. I needn’t have worried as Chariss was tall for her age and actually looked more grown up than me!

Even though I couldn’t go onto the red carpet because I’d given my pass to Chariss, I still made the trip from Widnes to London because I was eager to meet Sarah and Chariss, face to face. As soon as we saw each other we ran over and started hugging. We only chatted for a few minutes but it was worth the long trip.

It feels like only a year or so since I met Sarah and Chariss but it was actually 5 and a half years ago. We met on the 17th March 2010 and we’ve been friends ever since. We mightn’t speak very often but even if years pass between our emails it doesn’t matter. I support her and she supports me. We’re just two women, living our dreams.

Sarah’s just released her first book – A Shooting Star is not a Star and I’m so happy for her. It’s a wonderful book and I’m so glad Sarah sent me a copy. It’s part 1 of 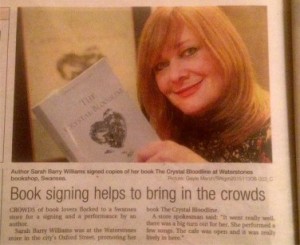 a series called The Crystal Bloodline and I can’t wait to read part 2. You should definitely check it out, why not download it onto your Kindle?

Reading Sarah’s book has made me even more keen to write and release a children’s fiction book in 2016. I can’t wait to get started!